like many folks these days, our plans have been canceled or rearranged, and while some days we might feel down about it all, others you just have to make your own happiness happen.  phillip and i did just that this past weekend with a quick getaway to louisville, ky.  it was a good halfway point to meet up with my dad (who drove up from alabama) and my younger brother clark (who flew down from chicago).

phillip, clark, and i got in around lunch, so after we dropped our suitcases at the hotel, we took a walk to the highlands to try out el taco luchador.  this spot was recommended by my friend sara, who lived here for several years, and is bright and fun, serving up delicious food and beverages. 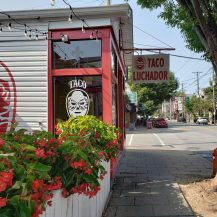 round one was a couple of coronas, of course, while clark tried the frozen watermelon margarita.  clark said his drink was tasty and only made better with an order of chips and queso.  apparently, the only way they serve queso in chicago is fundido-style which, although good in its own way, cannot quite compare to the runny, mouthwatering white queso you find at mexican restaurants in the south.  i think clark was in heaven with each bite!

as for the tacos themselves, we all three tried the baja fish taco and declared it the uncontested favorite.  between the perfectly battered filet and crispy cabbage, it was a taco that would satisfy any taco-lover in town. 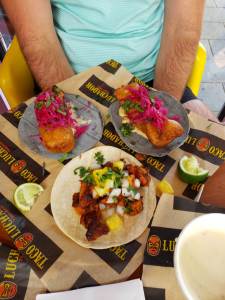 also tried (and devoured) were the al pastor, carnitas, and chicharron tacos.  they, too, were a tasty trio, and for me, the chicharron was so perfect and tender that i had to order a second!

later that day, milo rolled into louisville and, inevitably, it was time to eat again.  if you’ve ever been on a trip with my family, you know the plans largely revolve around food.  surely we aren’t the only ones?

we wanted something good but not too fancy and soon settled on trying feast bbq.  how did we decide on trying feast?  i’d be lying if i told you it wasn’t because of the bourbon slushies they prominently feature on their site… 🙂  also, it was a short drive from the hotel.

dad had the brisket sandwich, which he rated as an 8 out of 10.  i feel like that’s saying a lot seeing as how he has lived in the south over 30 years now and has tried his fair share of brisket.

clark went for the pulled pork sandwich with a side of sweet potato fries.  he commented that it all was perfectly satisfying. 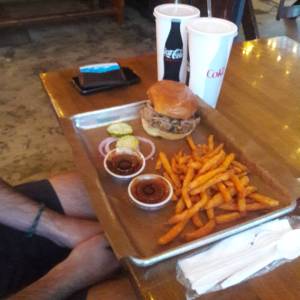 phillip and i were in a sharing mood since we were still full from lunch, so we munched on the simple salad (gotta get some greens, somehow, some way) and crispy mac & cheese balls (which, in our opinion, didn’t need the overpowering horseradish sauce at all). 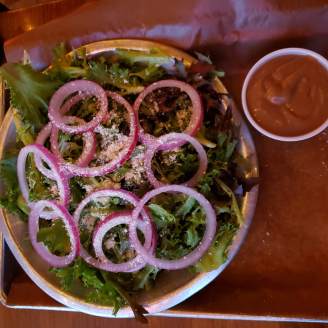 overall, we ended our first day in louisville two for two.  not a bad start!

One thought on “louisville – day 1”