Hello, my name is Aunt Cindy, and I am Kelsey’s aunt from California.  I am honored and a little scared to be a guest writer on her blog.  I recently flew to Pittsburgh from Los Angeles to meet up with my brother Gary (Kelsey’s dad and a former guest blogger) and my nephews Kyle and Clark for what I have named the “Coming to America” tour.

Our mother Goldie Despot came to America from the then Yugoslavia (now Croatia).  Her father Grgo (George) and Uncle Stipan (Steve) had arrived in America and were working in coal mines outside of Pittsburgh.  George sent for his children one-by-one; my mom Goldie was 11 and traveled by herself on a ship to New York.  She stayed on Ellis Island for several days and was then put on a train to Pittsburgh where her father was to pick her up.  My mother lived at different times with her father in Harmarville and uncle and aunt in Brownsville.  She grew up in these areas, went to school, and learned to speak English without an accent.  She eventually moved to California, married, and had my brothers and me.

My mother took us three kids on a train to Pittsburgh in 1965.  We all have memories of that great adventure.  My mother kept in contact with a few of her friends and cousins in Brownsville, but since she passed in 2001, no one has been in contact with them.  Gary decided he wanted to go back and visit and found a few relatives, so the new adventure began.

Gary and Kelsey drove to Pittsburgh from Atlanta and picked Kyle, Clark, and I up at the airport.  Here are a few photos of Gary and Kelsey’s driving adventure.

We left the airport in the rented minivan and, thanks to the Neuwirths (friends of the Alabama Andrich family), we were ready to video this awesome sight as we came out of the tunnel into Pittsburgh.

After we checked into our hotel, the Springhill Suites Pittsburgh North Shore, we enjoyed tasty appetizers of crackers with three different flavors of easy cheese and whiskey shots in the boys’ room.

the first of many “kelsey eating” photos. 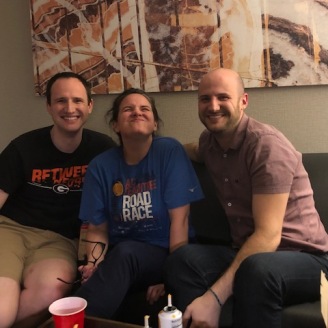 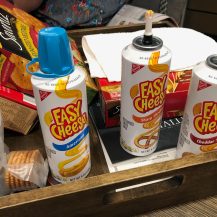 pour me another, bartender! 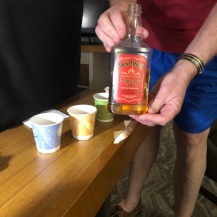 We set out to find something to eat and walked in the light rain to Mullen’s.  We ordered beers and other things to drink.  I spotted a Black and Tan on the menu.  I love a Black and Tan and this one was made with Yuengling Beer, which we on the west coast cannot get.  It was delicious!  Looking at the menu, the Pittsburgh Wrap caught my eye.  The menu said it was the #1 best seller, and I have to agree!  I loved it.  Grilled steak tossed with cheese sauce, coleslaw, and French fries.  My plan was to share it, but only a small portion went to Kelsey for a taste – I ate everything!  I never had French fries on a sandwich but have to say these French fries were not the usual boring fires.  I don’t know what they did, but they were delicious. 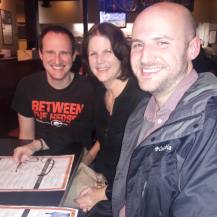 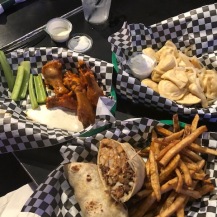 Kelsey went with the pierogis (which are filled dumplings of Central and Eastern European origin, made by wrapping unleavened dough around a savory or sweet filling and cooked in boiling water or pan-fried).  Kelsey and I were both looking forward to these, as they are not common in Atlanta or the South Bay area of Los Angeles.  Unfortunately, they were pretty firm without enough butter and, ultimately, very disappointing.  Clark had the chicken wings and enjoyed them very much.

After dinner we were all pretty worn out, so we walked back in the rain to our hotel for a good night’s rest.