a while back my coworker andrew had sent me a link that provided an extensive list of new restaurant openings here in atlanta in 2014.  as we decide which restaurant to try next, i always consult this list to get some ideas.  panbury’s double crust pies was scheduled to open in april, so i reached out to the owner lauren duxbury to share with her about our group and my mission to discover delicious local spots.  she was quite excited about my inquiry and invited me to stop by for lunch one day.  well, last weekend provided the perfect opportunity with my mom and younger brother clark in town to discover just what kind of pies this place was serving.

panbury’s is located in the sweet auburn curb market (municipal market) off edgewood in downtown atlanta.  i had never had a reason to venture to this part of town, so it was a travel adventure as well as a food adventure.  we parked and wound our way through the market, finding ourselves distracted by all the other food and market stands.  it’s not a monstrous space, which i quite liked.  there is plenty of seating for patrons who want to relax with a soda or snack after making their local produce purchases.  we continued to explore until we came upon the panbury’s counter.  how exciting that we finally were there!

i was eager to start our new restaurant experience, so i hopped right up to the counter to introduce myself.  we were welcomed warmly by lauren who seemed just as happy to see us there.  we ordered nearly one of everything that they had baked and waiting for us to devour.  mom cleared a space at that high-top counter so that we could watch the chef prepare these pockets of homemade deliciousness.  once we settled in, we rolled up our sleeves, removed the tin foil carriers, and helped ourselves. 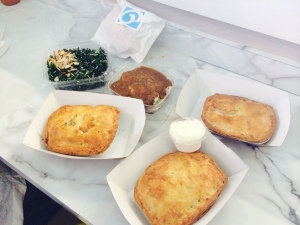 so, what exactly is a panbury’s pie?  it is an all butter puff pastry wrapped around savory, fresh, and natural home-made fillings.  with a hook like that, i think you can see why we wanted to try them so badly.

first we each grabbed a savory bite of the pork sausage roll, their version of a pig-in-a-blanket.  this menu item tastes much like thanksgiving dressing wrapped in a buttery, flaky pastry.  the pastry really is a standout, and chef adam has spent a lot of time perfecting the recipe.  he even went to great lengths to find the perfect pie press from south africa to craft these tasty creations.  well done, chef adam!

the sausage was delicious with the sage and other seasonings.  i would definitely recommend slathering this piggy with some of the mashed potatoes and gravy.  it really was a no-brainer.

while we had been deciding upon what to order, lauren nearly demanded we try the kale salad.  she said that even if you didn’t like kale, this salad would make you a believer.  alright, then!  one order of the kale salad, please!  mom went in for the first bite and knew that clark and i needed to try it as well.  after a couple of forkfuls, i had to confess i was a converted kale believer.  the kale is crispy, not chewy, and is dressed with a wonderfully flavorful citrus vinaigrette that really makes the dish.  almonds, cranberries, and parmesan cheese are also atop this light salad.  considering how heavy the rest of your meal will probably be, a side like the kale salad is a very smart idea.

clark had ordered the steak and chorizo pie.  he liked it so much mom and i almost didn’t get a bite for ourselves!  there is chorizo, savory steak, and red peppers in this dish.  it’s flavorful without being too spicy.  if you want to kick it up a level, though, lauren mentioned that they have a horseradish sour cream that would complement it well. 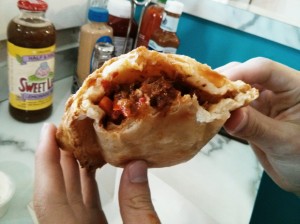 we all also sampled the mini steak and stout pie.  it was so tiny and adorable that we just had to have it!  this little guy is traditional and tasty with a subtle hint of guinness.  the tender steak and seasonings make this pie taste just like a pot roast. YUM.

i wasn’t joking when i told you we tried nearly everything.

i decided to go just a touch outside my comfort zone with the green thai chicken curry pie, one of the more non-traditional choices on the menu.  i’m going to ruin the anticipation for you right now and tell you that this one was hands-down my favorite.  you can tell the chicken has been pulled right off the bone; the dark meat and white meat were perfectly accompanied by the flavorful peas and curry sauce.  i had to quickly hand it off to mom and clark so they could steal a bite between mine.

throughout our indulgent lunch, chef adam had the chance to come out and chat while lauren manned the counter.  panbury’s goal is to provide affordable food that still has goodness inspired by south african and british traditions.  south african traditions, you say?  well, yes!  lauren and her sister daniella, who is a lawyer and also a panbury’s partner, grew up in south africa and then eventually made their way to the states.  lauren met adam in charleston when he was catering and studying molecular genetics at the citadel.  they both then moved to tulane so that adam could continue pursuing higher education in neuroscience.  after many classes and much studying, adam realized he really wanted to cook.  so, with that moment of clarity, lauren and adam trekked to atlanta to make their dreams come true.

they knew this city in a forest would be a perfect place to start things out, especially considering the large foodie crowd, diverse culture, and  large population of south african and british heritage.  their space at the market was an empty, blank slate, the perfect palate for their new endeavor.  they built everything up and out from scratch, and lauren’s father, an architect, worked to make their vision a reality.  panbury’s is welcoming yet subtly separated from the rest of the market.

considering the international influence of this menu, mom ordered the mediterranean roasted vegetable pie.  the veggies are actually individually cooked, which probably accounts for why they are so well done and not soggy.  this pie is hearty and will probably not leave you too hungry for more.  like all the entrée pies, this one is more filling that it looks.  do not let the size mislead you!

although mom and i were stuffed, clark somehow still had room for one more pie, a homemade apple turnover.  as clark removed the pie from its wrapper, heavenly scents wafted through the space to our noses.  the first bite was quite hot, as the pie had just been pulled from the oven.  but if you know clark, you know that didn’t stop him.  this pie, too, was gone in record time.  it even had raisins for an extra hint of sweetness. 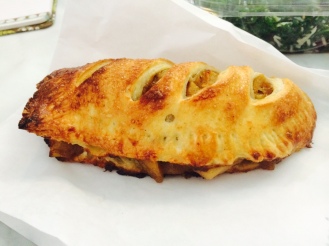 panbury’s is a delightful breath of air in the sweet auburn curb market.  this space is sunny and welcoming with bright yellow stools and light granite eat-in counters.  the smells alone will probably stop you as you stroll by on your visit.  lauren, daniella, and adam have created a lovely spot where you can spend your breezy saturday mornings.  the other vendors at the market have welcomed panbury’s with open arms.  the panbury’s crew is especially fond of miss d (aka the “mom of the market”), a sweet treats creator, and mr. kim, a local produce vendor.  some of the other vendor workers even come by twice a day for the perfect snack!

make sure you stop by to see what panbury’s is whipping up for you this week.  if you’re lucky, you’ll get to try the cajun gumbo pie, a favorite of both lauren and miss d.  all the possible flavors have been well thought through, given the time and attention to assure they are the perfect combination.  although they do offer one or two sweet pies daily, their focus is on those savory pies that make a meal.  that’s why they started this place!  that’s why they’re here.

p.s.  if there is one more comment i can leave with you, it’s this one:  eat everything with gravy.