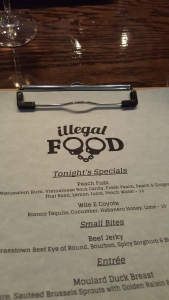 we’ve been on a roll with nrw through the month of may, and last week was no different.  per nathan’s recommendation, seven of us met up in virginia highlands to try out illegal food.  illegal food actually got its start as the first kitchen incubation project at the edgewood game bar joystick.  chef steven lingenfelter gained quite a following from the locals as he reinvented two of america’s favorites:  burgers and fries.  the success at joystick led them to their very own restaurant, and interestingly (and sadly enough) they now occupy the space that once was my beloved bar meatball.  bar meatball had a short life but will always have a special place in my heart.  it was hard to walk into that building knowing that i wouldn’t be having risotto meatballs over mashed potatoes and covered in gravy, but i guess that’s just how life goes sometimes.

illegal food’s chef/owner has a very diy approach to food and drinks here.  most of the sauces for their entrees and juices for their cocktails are made in-house daily for a very fresh taste.  doesn’t get much better than that!

i was pleasantly surprised to see that illegal food hadn’t completely gutted and redone the interior.  the black and white tile floor was still below my feet, and the clean simple space made me feel right at home.  although i would like to have dined outside, the summer air was still a bit muggy from the heat and rain we’d had the days prior.  the air conditioning kept us comfortable, and we ordered some chilled beverages to cool ourselves down even more.  i went with the terrapin recreation ale and ordered phillip the wild heaven ode to mercy (he’d loved it when we visited their brewery the weekend before).  kari kept it simple with a glass of the white knight pinot grigio, and we allowed the mid-week evening to help us relax. 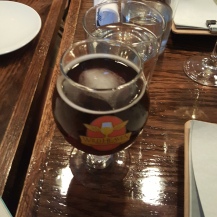 kyle went for something more youthful and ordered a dad’s old fashioned root beer from our waiter hardy.  yes, his name is hardy, like the hardy boys.  i bet he gets that all the time.  hardy was a perfectly attentive server throughout the evening.  he was there without being there.  our water glasses were full and our plates were quickly cleared as we emptied them to fill our bellies.  he was happy to answer any questions we had and seemed to really enjoy working there.

all of us had been to this building once before when it was bar meatball, but phillip had not and isn’t a frequent visitor of this neighborhood.  the lot in front of illegal food used to be free, but now it’s five bucks to get a premium spot.  so, phillip parked down on the street near us, and kyle waved him down on the sidewalk.  one thing i will say about the building is that unless you know what you’re looking for, you’ll probably miss the restaurant completely.  they’ve got this cool rusted FOOD sign right outside the entrance, but the entire illegal food name isn’t easy to spot.  regardless, i snapped a cute picture of kyle and kari upon our arrival.

the mister & the misses.

after ordering we caught up on everybody’s long memorial day weekend activities.  there was talk of harry potter world, carnival cruises, and poolside time.  it was so good to have the crew together, and since illegal food wasn’t terribly busy that wednesday night, it was easy to engage with the whole table.

after placing our dinner orders, hardy brought out a couple bowlfuls of their homemade jalapeno and cheddar chicarones.  they instantly reminded phillip and i of the pork rinds at smokebelly.  there was good flavor that wasn’t overpowered by the spice, and the crispy crunch of these rinds made for a perfect light snacking item.

soon enough the plates began rolling out to us.  we’ll start with the classic fries ordered by kyle.  these taters are seasoned with salt and pepper and served with a side of house made catsup.  the crunchy yet substantial texture instantly made us think of the five guys fries, which means they’ve just gotta be double-fried.  if a little is good, a lot is better!  i bet i’d probably never turn down something that was fried twice.  anyway!  i digress.  the homemade catsup was out of this world.  kyle was pretty much in love with its strong malt vinegar base.  my favorite thing about it was the fact that it was served cold.  phillip said it made him think of the carolina red sauce back at smokebelly, and if he’s comparing the two, this illegal food catsup is a close second to the savory sauce over there.  i’d agree with all that’s already been said about this homemade catsup, and i would also throw in there that it reminds me of arby’s sauce.  great, now i’m drooling in desire of curly fries.  good thing it’s almost eatin’ time again!

i’ll now move on to the sriracha honey fries, which sounded way better than they were and of which i completely forgot to take a picture.  sorry!  these fries were served with local honey, toasted sesame seed, and green onion along with the sriracha, or at least that’s what the menu said.  after reluctantly eating through this bowl of potatoes, we concluded that there was too much sriracha.  as a spicy food pansy, it’s no wonder i didn’t like them.  you couldn’t taste the honey at all, and the zingy green onion didn’t do a whole lot to help with the heat.  phillip himself actually likes some spice every now and then, but he didn’t really enjoy them either.  these things were so spicy my eyes were sweating!  i desperately tried to power through by dipping them in the homemade catsup, but even that didn’t do much for me.  the after taste will stay with you a while, and if you eat too many, you’ll definitely pay for it later.  you know what i mean, right?  yeah, you’ll be best buds with your restroom.  anyway, to wrap up this dish, this amount of sriracha really should be illegal.  ah, see what i did there!  with so much sniffling and a poor balance of ingredients, i know i won’t ever order them again.  if you do like some heat, though, i think it’s safe to say you’ll have a love-hate relationship with these potatoes.

now that we’ve gotten the fries out the way, let’s get to the important stuff:  the burgers.  kari and nathan both ordered the hank, a burger topped with american cheese, crisp shredded iceberg lettuce, sweet vidalia onion, house made dill pickle, and special sauce.  we never found out what the special sauce was, but i’m not sure how much it mattered.  kari and nathan were both pleased with their choice.  nathan liked it without the pickles but loved it a little more when he kept them on the burger.  he also pointed out to me that they don’t mix cows for their burger meat, a fact that made him even more fond of his dinner.  nathan felt if he had eaten this burger at the actual joystick gamebar, he might not have been able to appreciate it nearly as much.  kari’s final comment was that “they take the burger and they do it well here.”  well, shoot, that’s a pretty marvelous review! 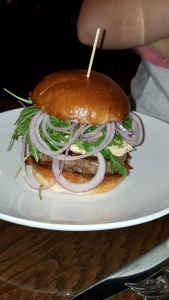 minds continued to think alike that evening when jamie and i both ordered the f&h.  our plates arrived, and it turns out this burger is not one but two patties with grilled red onion, house made bread and butter pickles, and american cheese.  it sounded like a different combination of flavors, and unfortunately for me personally, it wasn’t a winning mix.  my burgers were actually quite dry, and there wasn’t enough melty cheese to make up for it.  i would agree with jamie about the grilled onions, though:  they’re always a good grilled food topping.  i honestly, though, think the two patties were overwhelming, and two dry patties just were not enjoyable.

now, folks, i bring you to probably the star of the night:  the pimento burger ordered by both kyle and phillip.  this burger, which even looked superior to all the others, had smoked pimento cheese, grilled red onion, rocket, and bread and butter pickles.  i was jealous of phillip’s choice after my disappointing experience with the f&h; it was better than mine by a long shot, no question about it.  the chunky and melty cheese was creamy and delicious.  the arugula was the perfect green topping to put on there; it somehow seemed to bring out the juice and flavor of the patty.  i tried not to eat too many bites of phillip’s as i gladly shared a whole entire patty of my burger with him.  it was toward the end of the meal when kyle made what could be, up to this point, the nrw statement of the year:  “illegal food could quite possibly be my favorite burger joint in town.”  YES.  those words came out of the mouth of kyle, the self-declared burger king of atlanta.  boy, oh boy.  what a night!

now, i forgot to get a picture of this next one (i know!  i was slacking that night!  blame it on the sriracha sauce that fried my brain), but alison had the warden’s burger.  the goat cheese mousse and heirloom tomato jam on top of this patty were top notch.  after eating mine and just seeing hers, i truly wished i had gotten the warden’s burger, too.  maybe next time?  maybe.

down on the other end of the table, alison and jamie had ordered a bowl of the brussel sprouts.  once they finished what they wanted, they passed them down our way.  kyle took a few bites and said that he would gladly order these sprouts before going for the classic fries again.  that’s just how delicious they were!  even though the bottom of the bowl had some very salty bites, i agree wholeheartedly that they were cooked well and had very good flavor.

for me personally, it was pretty much a night of order failures.  between the too spicy sriracha fries and the dry and underflavored f&h burger, i was not turned into a first visit believer.  now, if you were to ask anyone else at the table that night, they’d say they were highly satisfied and would gladly come back again.  if you do find me back at illegal food, you know exactly what i’ll be ordering and exactly what won’t be on my plate at all.