somewhat on a whim, my mom and i decided to have a mother-daughter roadtrip after she spent the Christmas holiday with my younger brother clark up in washington, dc.  as you will find, this trip was just as much about our appetites as it was our time together, and i wouldn’t change a thing about it!

day one was a drive from the nation’s capital to norfolk, va.  for many reasons, it is a sentimental spot for my mother, and seeing as how i had never been, it was the perfect first stop on our trip.  during our drive south on i-64 we caught up on anything and everything and solved all the world’s problems at once.  if only someone would ask for our opinion, lol!

it ended up being quite a drive with lots of traffic and roadwork, so by the time we arrived in mermaid city, we were a hungry pair.  we dumped our luggage at the hotel and had a mostly forgettable dinner at guy fieri’s smokehouse.  even though there admittedly were generous lumps of crab meat atop our waffle fries, the best part may have been watching people trying to ride the mechanical bull.  that’s always good entertainment.  thankfully, dessert on the other hand was a bit better with a sweet treat from the fudgery, which my mom remembers from when she tended bar at a nearby waterside restaurant.  isn’t it neat how we can recall things like that?

after a good night of rest, the next day we started with some breakfast at yorgos bageldashery.  it had glowing reviews on yelp, and since i love a good bagel, we decided to give it a try.  it turns out we have taste just as good as the locals, as they were swarming the place right upon our arrival.  we chatted it up with another patron in line who recommended the chicken salad, so we split some of that along side a couple of bagels.  mom had a pumpernickel bagel with olive spread (an ode to her mother florence) while i enjoyed a classic plain bagel with veggie cream cheese. 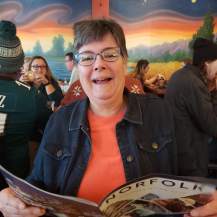 quite a spread. see what i did there?

while we waited on the bagels, we dug into the chicken salad first.  was it tasty?  yes, but when you come from alabama and georgia, your chicken salad tastebuds are a little different.  i don’t think we would order it again, but everyone does chicken salad differently, and theirs was all their own.

mom loved her bagel, especially because there was an abundance of olives, both green and black!  my bagel was also delicious.  i think i would have gone with a different spread (and maybe doubled up on the cream cheese because we all know i love cream cheese) but still ate up every bite of mine. 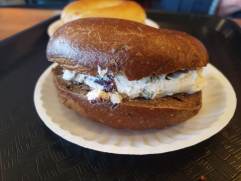 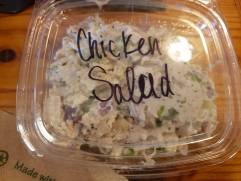 fueled up with full bellies, our tour of norfolk continued as my mom drove us past a couple of houses her parents owned when they lived there.  we even found the church where my parents married nearly 35 years ago now.  even though the town may not be exactly as she remembered, it was still fun to be with her as she took a trip down memory lane.

it was time for our virginia visit to end, so we turned west and made our way to greensboro, nc, where he had a date the next day with some childhood friends.  once we arrived, we were, of course, hungry, so i directed mom to the closest hops burger bar there was.  i have been there multiple times with someone or another, and a juicy burger sounded irresistible.  it was a no-device dinner, so even though i don’t have pictures, i promise you our starter salads, the french onion burger, and the north carolinian burger were just the ticket that evening.

the next day we couldn’t help ourselves and took a morning class at the local orangetheory fitness studio.  it was a tough one but well worth it so that we could undo it all with brunch at the iron hen cafe.  we had just missed the breakfast shift, so we ended up with some complementary shots from the bartender, an order of deviled eggs, a bowl of grits and greens, and the whole grain hash with grilled chicken. 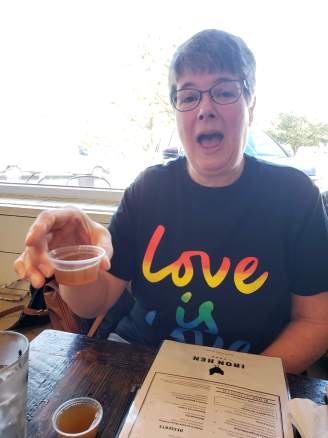 after brunch we still had a little bit of time and a tiny bit more space in my our stomachs, so per a friend’s request we plugged into google maps “maxie b’s” and were soon in dessert heaven.  this bakery is the most darling place i’ve been to in a long time, and i only wish i could somehow transport you there so you could experience it for yourself.  it’s a chic and prim spot that somehow avoids being stuffy.  we saw all sorts of folks stopping in for a slice (or two) and could have drooled over each and every bakery case.  instead, we decided to just get some cake for ourselves and relax in their dining room.

mom ordered a slice of the raspberry lady and i the all american chocolate.  maybe it was because of the dainty and simple atmosphere, perhaps it was the compost-friendly plates and forks we used.  whatever it was, every single bite of these cakes was decadent and rich and indulgent and just about perfect.  and even though i’d love to have a maxie b’s near us in georgia, it might be for the best that we don’t.  who knows how much of my business they’d have! 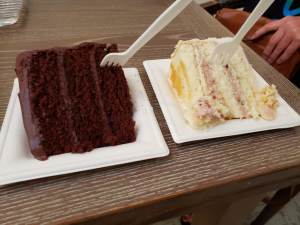 by the time we wiped our faces clean of cake crumbs, it was time to get some time with some longtime friends.  mike and mary live in greensboro with their two daughters, and it just so happened our visit crossed paths with mary’s parents mark and kathleen.  it was an unusually warm december day, so while the men worked hard in the yard, us girls enjoyed each other’s company at the nearby park.  between the slides and monkey bars, we chatted about new homes and new jobs and upcoming weddings.  it was a lovely day with lovely company, and we could not have asked for much more.

the final leg of our trip was a quick hour east in durham to visit my dear friend sarah.  we met during our redcoat marching band days in college and have been close ever since, regardless of the distance.  she ventured far and wide as a travel nurse for several years before settling in durham for a full-time position, and although quite a change of pace, her precious home and quaint town seem to suit her well.  she did have to work a couple of night shifts during our visit, but we still had a ball ringing in the new year over black-eyed pea dip and mimosas, a delicious mexican dinner with big drinks, and a funky german brunch.  i hope it isn’t too long before we get to see her again.  🙂

but as we know, all good things must come to an end.  so, just like that, it was time to head on home to georgia.  if you ask me, the time with my mother and our friends was priceless and the sweetest way to bid farewell to the year now passed and welcome in a new one full of possibilities.  i hope your decade has started out on a positive note and that you open your arms to all the things that may be.