well, folks, it has finally happened:  our first weekend excursion for nrw!  and who was the lucky host?  folk art restaurant in the heart of inman park.  shelby had heard about it from a friend and bolted over to my cube one day at work to insist we go.  “well, let’s!” i told her.  and just like that we had sunday brunch planned for the crew.  ah, sometimes life is that simple.

folk art is a “rustic” “feel good” breakfast, lunch, dinner, and brunch eatery led by chef-owner jason hill of the sister restaurant wisteria.  the menu boasts big drinks and generous food, things up the alley of a typical 20-something after a weekend of raucous fun.

the atmosphere is bursting with charm; it actually reminds me of the eastside jittery joe’s in athens with all of its local art, exposed brick, and “weathered wood floors.”  it is comfortably eclectic and mildly hipster with its american pickers-inspired décor.  the magnetic refrigerator letters are nostalgic and homey alongside the mason jars lining one wall.  it’s all just ultra southern girl basic, and we were soaking in every bit of it.

but that’s enough about the décor.  although ambience is a big factor for me when trying a new place, the food is really the reason we come.

almost everything on the menu was tempting me to order it.  i could nearly hear the southern comfort shrimp and grits calling my name.  there is such a variety for brunch – what is a girl to do?  order two things, that’s what she should do!  ah, yes, i give you full permission to blame any weight gain due to nrw on me.  i am quite the enabler.  i also have very little self control when it comes to food, so i will be right there with you.

since it was a little earlier in the day, caffeine was certainly in order.  i was all kinds of ready to order an energizing mimosa, but they cannot serve alcohol until 12:30 p.m. according to georgia law.  hmm…alright then.  coffee and orange juice it is! 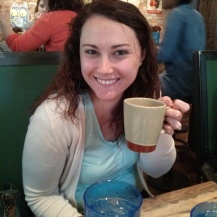 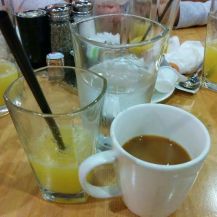 as we perused the menu, i took a glance at the folks around us.  all the plates on their tables were BIG.  folk art certainly does not skimp on the portions, and i did not mind at all that morning.  i think you can tell by the smiles on our faces that we were ready for some good eating. 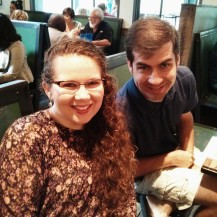 we’ll start things off at the ladies’ table with shelby, whitney, and hannah.  shelby had been quite eager to try out folk art, so she wasted no time in digging into her lobster eggs benedict when they arrived in front of her.  she ate almost the entire plate and could not have left the restaurant happier; i think her picture is pretty telling. 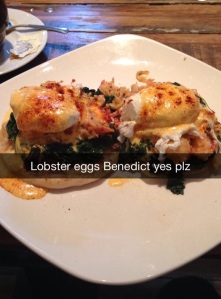 whitney had the cinnamon pecan sticky bun pancakes, which she described as “perfection.”  she has guaranteed that she will be coming back, and i’m betting it will be soon.

miss hannah also went for the cinnamon pecan sticky bun pancakes, which to her were more like dessert than breakfast but so, so good.  she’d recommended them quickly to anyone with a sweet tooth.  having now eaten both dinner and brunch there, folk art remains hannah’s atlanta restaurant obsession, and she cannot wait to dine there again.

okay, so our table was extra ravenous that morning, which means we didn’t hesitate in ordering almost anything and everything we wanted.  we started with a plate of the cinnamon pecan sticky bun french toast for us all to try.  this toast was dense.  as an entrée, we all agreed it would be too much for one person to eat.  but as a dish to share among a few folks, it’s definitely a good choice.  it isn’t overly cinnamon-y, and it could definitely use more of that cream topping/drizzle stuff.  yesss.

nathan went with the folk southern fried that morning, and i was jealous the moment it arrived.  biscuits, fried chicken, fried eggs, and sausage gravy?  what more could a girl want?  oh, maybe the love of my life?  nah, i’ll be content with unbelievable food for right now, just this moment at least.  anyway, i digress!  i snuck a bite from the corner of his plate and knew he had a winning meal in front of him.  i was in awe as he ate the entire thing, because that food looked heavy in all of its gravy goodness.

it seemed people had been talking about chicken and waffles around me lately, so it was an easy choice to go with the foul play for breakfast.  i took my first few bites, instantly satisfied with the perfectly cooked and perfectly crispy chicken.  as i worked through that waffle, though, i came to the conclusion that the whiskey peach compote was not really necessary at all.  its juices were battling with the chicken and took away from the intent of the dish, in my opinion.  the waffle was certainly of a homemade recipe, but i think i would rather have had the chicken with a pancake, to be quite honest.

kari may have had one of the best orders of the morning with the banana nut fosters pancakes.  it was a good melding of flavors, especially with that extra hint of nutmeg.  the pancake batter itself wasn’t your norm, but she still liked it.  nathan and i agreed on kari’s review; these pancakes were unique and delicious, and i almost wish i had ordered them for my meal.  some people are just really good at ordering really delicious food!  i wasn’t able to snap a picture of kari’s plate, so you’ll just have to use your imagination!

we paid our checks to the kind waiter and took our time rolling out of those benches.  if you don’t find yourself feeling full after leaving folk art, well, then, something has gone awry.  you will arrive hungry but walk out leaving satisfied and ready for a perfect afternoon nap.  like many of the diners today, i can certainly see myself coming back here to try out lunch and dinner, and i would love to bring friends and family to folk art when they are in town, too.

the look of pure satisfaction, i promise.