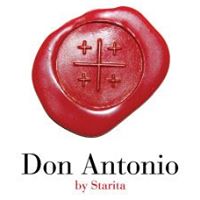 after our pizza eating flop last week, we figured we’d give it another go, this time at don antonio.  i’d heard only great reviews about this restaurant, so it was our turn to check out the hype.

don antonio is a spot that strives to offer the finest pizza this side of the atlantic ocean, and considering the accolades it has already received, most folks could convince you that they have.  they serve up wood-fired neopolitan pies of all varieties, from your traditional red-sauce pies to gluten-free, vegetarian, and vegan pizzas.  it’s a great place to come if you have a group with special dietary requirements.  the mozzarella is made in-house, and it’s an easy thing to believe once you give it a try.

don antonio is considered among the elite, placing amongst the top 25 “best pizza places in the us” by food and wine magazine.  the dishes have even been featured on several magazine covers.  founders and owners roberto caporuscio and antonio starita are renowned as pizza makers all over the world, bolstering their restaurants with years of industry experience and authentic, italian culinary training.  the original actually is off west 50th street in new york city, having had its grand debut back in february 2012.  now as for this buckhead location of don antonio, just what did we think?

don antonio is tucked away in one of the many little shopping centers in the buckhead/east andrews area of the city.  the patio was quite precious, but that summer heat was still lingering, so we asked for a table inside.  the indoor dining space isn’t too large, but it isn’t too cozy either.  the tables are spaced far enough away so you don’t feel crowded or cramped.  they’ve got a great semi-private area that could be curtained off for an event.  it’s simple and sleek and no-fuss.  i, personally, quite liked it.

we were doing an earlier dinner, but that doesn’t mean we were any less hungry than usual.  the salads looked to be a bit larger from what i saw at some other diners’ tables.  lucky for us they have a dollar menu here!  yes, just like mickey d’s and taco bell.  okay, maybe they wouldn’t like us to call it a dollar menu; it’s more a “quick bites” selection, and our group was all about it.

jon couldn’t resist something described as a “fried dough puff,” so he ordered one of each of the montanarine and the genovese.  they both looked cute and delicious, and jon quickly devoured them in only a few bites.

brandon also tried the montanarine.  like jon, he found it a little difficult to cut that puff, but that didn’t make it any less tasty. 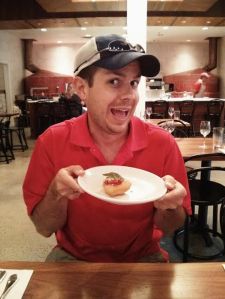 alison and i both love arancini, thanks greatly to our discovery of this classic rice ball at bar meatball, so when we saw it on the antipasti menu, we couldn’t say no.  these dainty treats were the perfect way to start the meal.  they were just the right bite-size with that salty baked italian ham.  mm, my mouth waters just thinking about them again! 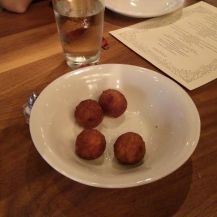 our pies came out in a more timely fashion than i expected, considering each one was cooked individually in those big ‘ole brick ovens.  they say you eat with your eyes, and after seeing these plates in front of us, i was quite looking forward to the meal.  the waiter brought out the prosciutto e arugula, which somehow was accidentally made for the table.  oh well, an extra pizza is fine by us!  the prosciutto was wonderfully salty and nicely complemented by the olive oil that was drizzled atop.  i actually didn’t eat a piece of this pizza itself, but rather munched on the meat.  it was everything prosciutto should be.

alison had ordered the traditional, red-sauced version of that same pizza, the girella.  the arugula was a little overpowering (it looked a small garden had taken over), but she agreed that the prosciutto was out of this world.  having had a slice of both the red sauce and white sauce, she preferred the prosciutto e arugula to what she actually had as hers. 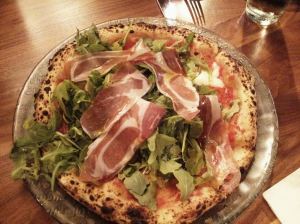 alison’s husband nathan was quieter during his meal, savoring the pizza he ordered.  his selection was a recommendation from the waiter, and although nathan cannot recall what he had, he ate each and every slice.

brandon is a big pizza buff, but tonight he mixed things up and went with the traditional calzone.  it looked intense when it arrived; there’s no mistaking this calzone for the mildly hungry.  that thing was packed to the brim with salami and mozzarella and ricotta.  brandon made it about halfway through the calzone and had to take the rest of it home with him.  brandon was more than ready to have it for his next meal, but he did mention that the traditional italian salami was different than what he was expecting.  in what way, he couldn’t pinpoint exactly, but now he knows what will be coming the next time he orders something similar.

jon was excited for something spicy that night, so he ordered the padrino.  he was looking forward to trying another pizza with some sopressata because he loved the one he had at baraonda so much a couple months ago.  his plate was placed in front of him, and the first thing out of my mouth was “jon, that looks like the devil’s pizza!”  the sauce just looked so red and so spicy, i was scared to get too close!  jon was quite the champ, though, and ate three of the four slices.  don antonio’s version of this pie was a bit spicier, even for jon, and if you asked me, i would bet jon liked the one he had at baraonda more, even though he didn’t have to come out and say so. 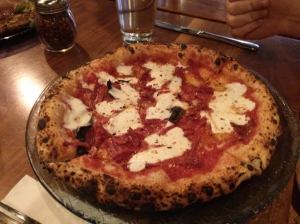 ah, but finally, what did i have that night?  i was having a hard time deciding, which really is no surprise, but artichokes sounded like a good idea, so i had the margherita with artichokes.  first, the dough at this place is on another level.  it’s lightly crisped on the bottom, and it’s so dang fresh you cannot help but want more.  the only thing i didn’t care for with the crust was the almost ashy taste it had on the bottom.   i know it is due to the well-worn brick oven, but that flavor didn’t leave my tongue for quite a while after dinner.  the artichokes were not cut too large, good enough sizes to have one with almost every bite.  i was miraculously able to finish each slice, but only because i left the crusts behind.  one would think i loved this pizza since i ate it up, but love is not the word i would use.  am i fond of it?  yes, i would say so, but later in the evening i finally figured out what was keeping me from loving it:  the red sauce was too tangy for my taste.  it lingered around after the meal, and it wasn’t in a good way for me.  i wish i had followed my gut instinct and gone with a white pie instead.

so, does this award-winning restaurant gain our applause as well?  i would think it is a quiet, muffled applause.  everyone seemed to enjoy their meals just fine, but none of us strolled out of there believing our pizza lives had been changed.  if you are a pizza lover, then yes, certainly come by and give their pies a try.  as for me?  if i am looking for authentic and delicious pizza in the city, you’ll probably find me in west midtown at antico.  now that place?  that place i will make a big fuss about all day long, it’s just that wonderful.