with a whole first day of newly found confidence, we woke up saturday morning ready to take on the day.  i mean, i could just feel it was going to be a good day because it was loads easier to put on my boots.  🙂  once i got the rest of my gear all situated, the group decided to start things off together at the white otter lift since it was within skiing/snowboarding distance of the cabin.  in theory it sounded like a great idea, because this lift would take us up to a run that would get us to base a lot quicker than trekking through the snow.  plus, the crew felt i was ready for the white wing run, and i didn’t want to disappoint.

long story short, here is how things went on the white otter lift and white wing run.  i got onto the lift all by myself no problem.  i enjoyed the scenic and quiet ride up the lift.  i completely ate it when i got off the lift, one ski popping off but my energy still intact.  i watched as the crew, one by one, shooped down the very steep entrance from the lift onto the run.  i also observed, with much trepidation, as phillip made his way down as well, slowly but surely.  i took a big gulp of “i have to get down some way” reality, mustered all the spirit i could, and launched myself down the hill.  i’m not quite sure what happened, but the result was a quintessential wipeout right in the middle of the run.  the struggle was real one attempt after another as i tried to get my ski back on and get myself out of the way.  eventually i righted things and after a few more confidence-crushing falls, i shuffled my way to the finish line.  when i finally found phillip, all i could say was, “well, that is the least amount of fun i have had this entire time.”

there was good news out of this, though:  that i recognized what my abilities were and were not and, as such, spent the rest of the day back at bear basin.  phillip was a patient and positive cheerleader throughout the windy afternoon as i worked on weaving and faster turning and getting all the fresh mountain air that i could. 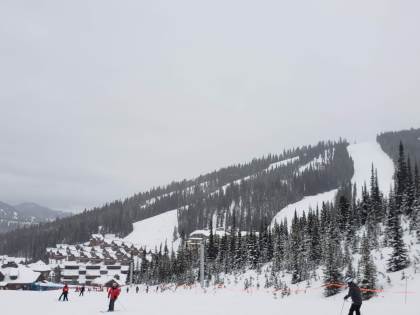 a little cloudy but still gorgeous. 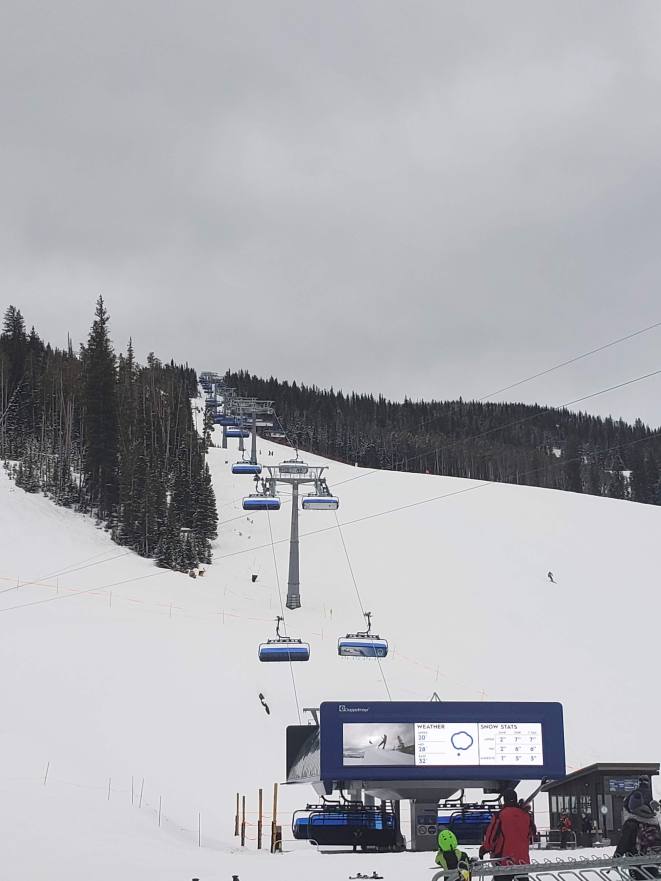 ultimately my goal for the second day of skiing was to end on a high note, and i think these pictures are evidence of just that.  🙂 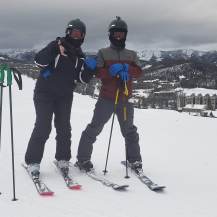 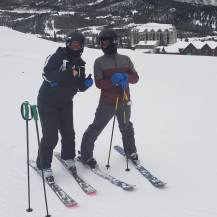 the rest of the crew, much more advanced, took on blues and double blacks and had some sweet pictures to share.

the slopes eventually closed and it was time to return our equipment.  at some point phillip and i had considered skiing on our third and final day in big sky but decided together that a restful sunday sounded much more appealing.  as such we trudged back over to lone mountain sports and signed everything back in.  oh, and before we left we couldn’t help but venture upstairs and check out their retail selection, where we found phillip a dashing pair of helly hansen winter boots to wear home!

the rest of the late afternoon was pretty much everyone just lounging around at the cabin and exchanging stories from their day on the mountain.  we were all pretty tired, to be honest, but that didn’t stop us from heading back to the resort to check things out.  not in the mood to pay for overpriced beers and cocktails, ash and i (and some others) picked up drinks from the lodge’s little convenience store.  local brews for the win! 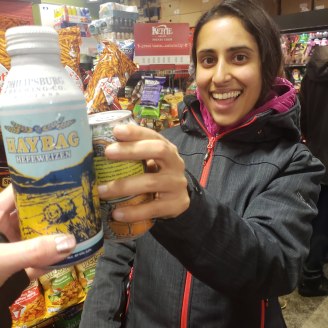 now, the actual intent of us being back at the resort was to check out djs at snobar.  it was wonderful timing that this outdoor event was being held the same weekend we were in town, and i came to find out that one of the djs performing was one of ben’s favorites.  how cool, literally!  we got word that, of course, there was a fifteen dollar cover to get into snobar, and i was just about to be on board when i realized how loud the music was, and we were a hundred yards away.  as much as i wanted to be part of the crowd, i also did not want to waste my money to have my ears blown out.  i admitted that i was an old fart who could not handle a thumping bass for more than a minute or two, so i hung out indoors while everyone else enjoyed.  i’ll say, though, that i wasn’t totally bored.  while waiting i met kevin from butte who, after a little conversation, told me i was his spirit animal.  aw, thanks, kev! 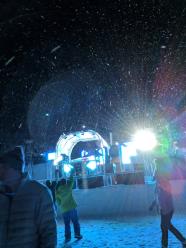 once everyone got their snobar fill, we ended up back at the cabin and played the game werewolf.  i don’t want to give anything away, but here is my advice about werewolf.  your friends may become your enemies.  you will end up screaming a lot.  but you will have the most fun doing it all!  it was a great wrap-up to another great day.