some of my plans fell through this evening (which seemed to be continuing the weekend trend…), so when clark got back home from auburn, i easily persuaded him to go try gypsy kitchen in the buckhead atlanta area for dinner.  i love going out to eat with clark because he’s always up for it and is usually interested in trying a new place with me.  gypsy kitchen had opened back in mid-october, and after driving by it nearly everyday and seeing it pop up on my facebook newsfeed, it was time we see what it is all about for ourselves.

we took the short elevator ride up from the plaza to the front doors of gypsy kitchen.  after being greeted by the hostess, we were quickly seated in the corner of the covered outdoor patio.  from the moment we pulled in our chairs to the signing of our checks, clark and i both agreed that gypsy kitchen would be a great date spot with their high ceilings, old world-inspired decor, and spacious seating.  the atmosphere is not too intimate, but you also do not feel like you are out in the open for everyone’s viewing pleasure.  the outdoor seating will make for glamorous people-watching as the buckhead socialites whisk into hermes and out of dior.  it’s low-key and relaxing and not too bustling so that you can take things dressier or keep it more casual if you want to stroll in with your jeans and chambray shirt, as yours truly did. 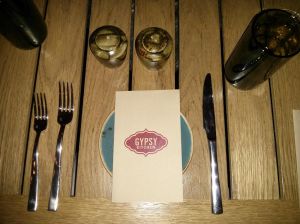 to personally describe gypsy kitchen and their mission would probably be a disservice, as the story they have written for themselves is so captivating.  i beg you to take a quick read yourself and tell me, i dare you, that you are not intrigued to come by just like we did.

their bar is known for its gin-based concoctions, but there is also a lengthy wine list for all you self-proclaimed sommeliers out there.  i concluded that a white wine was a good idea to wind down a relaxing weekend, so i took stephen’s recommendation with the white shaya verdejo.  it was nice and dry and just what i wanted tonight.  accurate and satisfying choice, sir! 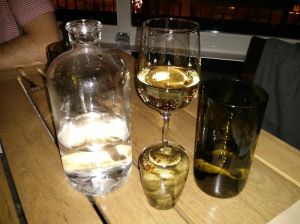 the beauty of a place like gypsy kitchen is that they have plates of all different sizes to accommodate your dining desires.  clark and i didn’t need a family-style meal that night, but we weren’t too ready to pass up a starter.  under the picas y montaditos, we ordered a couple of the toasts to hold us over until we were ready for our entrées.  we both first tried the slice with tomato fresco, garlic, olive oil, and sea salt.  although very basic and straightforward, it was very well done.  if you love tomatoes, it is a must-try.  they were fresh, and the flavors were incredibly clean.  i could have eaten a whole loaf with that stuff and been set, but there was so much more on the way that i needed to save room! 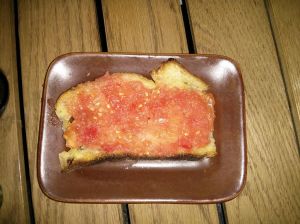 up next was the homemade marcona almond “nutella” and shaved chorizo.  clark’s face said it all, as he took a bite before me and politely set it aside on his appetizer plate.  after trying some myself, i agree that i was not sure what to think.  i had imagined it would have been a sweet and salty pairing, but the combination was a little too unusual for our palettes.  if you are not the most adventurous eater, i quickly advise you not give this one a try.  heck, even our waiter stephen did not suggest it, clearly for good reason, and we should have listened.  goes to show that we’ve learned our lesson, haven’t we? 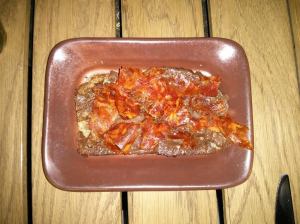 the kitchen was quick on this sunday night, but i cannot attribute it to it being a slow evening.  there were plenty of folks seated on the patio with us, and things inside looked busy as well.  this tight ship must be a well-oiled machine behind the scenes!  our waiter stephen was attentive and friendly and very knowledgeable, for he was able to field all the questions we threw at him.

after going back and forth between a couple options, clark settled on the pan roasted pork tenderloin and, to spoil it for you right now, declared it a homerun.  first, the crispy leeks were more of a garnish to add a slight texture and minimal flavor; clark could have done without them just as easily as he did with them.  now on the other hand, the tortilla espanola, a spanish omelette that actually reminded us of a quiche, was a great pairing in place of the traditional rice or mashed potatoes with which pork tenderloin is typically served.  it was the romesco sauce, though, that stole the show for him with its bell peppers, almonds, chilis, and garlic; i swear he could have eaten a bowl of that stuff with a spoon in no time.  the pork was cooked well with that pink center like you would expect, and with all the components working together, clark would come back to gypsy kitchen and order this dish again without hesitation. 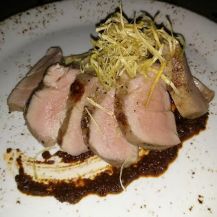 the first phrase that came to mind when my meal arrived was “comfort food,” as my butifarra was served in a wide, shallow bowl.  when i had asked stephen some questions about it, he said it had a little spice to it, but that if i could handle some chorizo, i would be good to go.  well, let me say that i’m glad he didn’t scare me away from the butifarra because i loved it.  the catalan pork sausage was crumbly and flavorful and delicious on its own but was even better with a little crunch from the herbed bread crumbs on top.  the sauce tasted complex, and as i later found out, it is comprised of chicken stock, onions, peppers, garlic, fennel, and parsley. the flavors worked well with the spiced sausage, but if i had to say something negative, i would say it was the tiniest bit oversalted.  now, that, of course, did not keep me from eating the entire meal.  the white beans were cooked al dente and had a slight crunch to them, something that pleasantly surprised me but something for which clark did not particularly care; he prefers his white beans a little more cooked and much softer like at zoe’s kitchen, of which i have to admit that those braised white beans with that rosemary is one of my favorite things, you know, like raindrops on roses and whiskers on kittens. 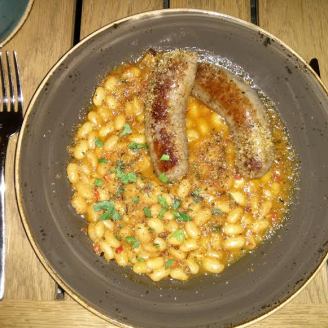 our meals were light yet substantial, filling but not stuffing, unlike a good thanksgiving turkey, which should be bursting at the seams with dressing.  yes, folks, it’s called dressing, and that’s what every southern girl should refer to it as.

there were no food comas tonight for these diners, and actually, we were so nearly perfectly satisfied that one more course sounded like a grand way to end our first gypsy kitchen experience.  after perusing the options, we decided upon the dark chocolate pistachio cake.  this dessert is small but mighty and will be the perfect finish to the rest of your meal.  it is light and airy, not dense at all.  the cake isn’t overly sweet, which means that the white wine caramel can sneak in and plesasantly hit your taste buds.  clark was a little skeptical of the pistachios, but after stephen assured us they were not the focus of it, we tried them and determined they complemented the cake and rosewater chantilly cream nicely, because everything here is so nice.

as we thanked stephen for a lovely evening, i was able to tell him with assurance that we would certainly be back again, and hopefully with more mouths to feed.  i love getting to write posts like this one, because when everything is so convicing and when everything lives up to the expectation you hear of and are given, the good words flow naturally and endlessly.  even though buckhead may be known for its heinous traffic, stop making excuses and bring your honeybunches down to gypsy kitchen.  i can personally guarantee you’ll be glad you did.