last week was the grand opening of the latest spot in old fourth ward, ladybird grove and mess hall, and we just had to be there!  i got in touch with general manager creighton mcmurray to get the deets and was quite delighted when he invited us to come on out for opening night on monday.

ladybird grove and mess hall is tucked nicely into this neighborhood, with kevin rathbun steak to its southeast and the beltline right in between the two.  if it’s your first time visiting this part of town, you might be wary as your gps directs you here, for you feel as though you may be intruding upon a residential area.  fear not, though, for once you get to the end of john wesley dobbs, the big ladybird sign will wave you down.

i arrived earlier than the rest of our group so that i could steal a few precious moments with the staff.  creighton and i had been exchanging e-mails, and i was looking forward to meeting him.  the waitress seated me and brought some water and then creighton joined me at the family style table for a quick introduction.

“so, how does it feel, now that opening day is here?  did you sleep at all?  are you overwhelmed?”

“actually,” creighton responded, “i’m feeling comfortably whelmed.  i got a little bit of shut eye, but things are going great.”  well, if that isn’t great news for a restaurant’s first night, i don’t know what is.

“i know you’re busy, but tell me a little bit about ladybird’s identity, because the web site is quite simple.”

“haha.  yes, our site is a bit vague right now,” he laughs (note that it has since been updated with their menu offerings).  “we want ladybird to be a laid-back place that anyone can enjoy.  we’re a from-scratch kitchen making good food.  we want folks to want to hop in for a burger and beer after walking their dog or going for a run.”

their location really is quite perfect for all of those things.  i can see ladybird quickly becoming a must-try spot in its opening months, especially with its screened-in dining area and roomy patios.  the exposed brick and carshop doors inside keep the space tall and airy, as does the wilderness murals.  the whole atmosphere is something i haven’t experienced really ever, and i was definitely feeling it.

the menu caters to folks of nearly all appetites and price points.  there are starters and small plates and individual meals and platters to share among friends.  there’s so much to try, and you can bet that we did our fair share of tasting. 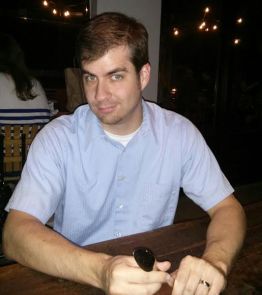 our group loves a good appetizer, so after seeing the navajo fry bread pass by to another table, we knew we wanted to give it a try.  this trail snack of bread is topped with country ham, honey, cilantro, and black pepper.  we cut the bread up as best we could so we all could get a taste, and i think i fell in a little bit of love.  the crust is flaky, almost like a quiche.  the ham is nice and thin like prosciutto but not overly salty.  the honey and cilantro were excellent garnishments.  i honestly could have ordered the bread as my personal starter, that’s how much i liked it.

next came out the moses sleeper from jasper hill, vt.  ladybird has a fair selection of cheeses you can order from the picnic basket area of the menu.  the waitress described our choice as “pasteurized and semi-soft.”  it was accompanied by toasted bread and a mustard sauce.  after seeing nathan, ricky, and jamie take their bites, the reviews seemed a bit mixed.  well, i just had to find out for myself!  i slathered the cheese on the bread and topped it with the mustard sauce.  i took my first bite and thoughtfully chewed.  the flavor combination seemed unusual, and i think the cause was the mustard sauce, and i think i would have preferred my bite without it.  i took a taste of the sauce on its own to try and figure out how i felt, and as i thought, it finally dawned on me.  it tasted like fruit leather!  that stuff that was supposed to be a healthy alternative to the traditional fruit roll-up when we were younger.  i asked jamie to give it a taste, and she instantly concurred.  we then found ourselves on a tangent from the meal, listing off all our favorite childhood snacks:  fruit by the foot, gushers, mondos, ice pops and flav-o-ice, dunkaroos, cheese wiz and crackers, capri sun, lunchables, warheads, honey buns, zebra cakes, twinkies, cosmic brownies, chips ahoy.  oh, and someone also named swiss cake rolls, and it seems jamie and i were the only ones at the table who remembered peeling back the chocolate layers one-by-one.  ricky and nathan were bigger fans of the unwrap-and-devour method.  i digress. 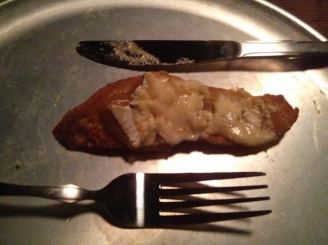 ricky kept it straightforward with the burger and was quite satisfied.  it was obvious the patty was cooked on a real grilltop, giving it that outdoorsy taste and feel.  he also loved that the bun had been warmed on the grill as well, an extra crunch and added flavor. 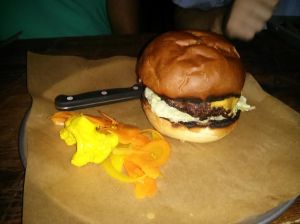 nathan and jamie were great minds thinking alike that night and ordered the chicken and dumplings.  the waitress let them know that the dish was more like chicken pot pie, and i think that description is much more accurate.  i mean, take a look at the picture below.

i’d be lying if i said i wasn’t a little jealous of their dinner when it arrived.  it looked so hearty and rich and savory, and that’s just how they described it.  the chicken was practically falling off the bone, and it was so moist among all that sauce/gravy goodness.  jamie let me steal a bite, and it’s a good thing i was already full from my dinner; otherwise, there’s a good chance i would have slopped up the rest of hers.

i wanted to mix things up and keep the dinner diverse, so i had the grilled lamb steak.  the carrot puree almost perplexed me because it tasted just like sweet potatoes.  that’s fine by me, although i’d be interested to know what makes up this side dish.  the puree was rich and delicious with a hint of spice.  i almost wish i had asked for a spoon…

i didn’t even think about it, but there was also a side of roasted eggplant.  i never order eggplant when i go out, simply because i never think to and usually glide right over it on the menu, but oh man.  this eggplant may have made me a believer.  i don’t know how they prepared it or what they put in/on it, but whatever it was, it was delicious.  it also was a little bit spicy, but i didn’t mind because it also was quite rich.

now, let’s get to the star of it all, the lamb.  first, it was the perfect portion considering the heavy sides accompanying it.  i like my meat, but i don’t always need a huge slab of it on the plate.  although the tarragon and chimichurri were a little more mild as a topping, they must have marinated that lamb in something with a kick, because after taking my first bite, there was definitely some after-spice that i, the spicy whimp, didn’t mind at all.  sometimes spicy can be flavorful, and this dish was right in that ballpark. 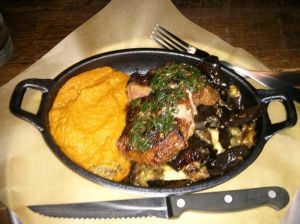 as we ate our way through the menu that night, a tempting and delicious scent wafted through the air and to us:  their coffee.  i first picked up on it (you know, with my barista instincts and all), and then ricky caught a bit himself.  it smelled divine.  had i been at all in the mood for a cup of joe, i would have beckoned the waitress for one immediately.  however, considering the later hour, i left the coffee drinking to ricky.  doesn’t he look so happy?  he said it was wonderful, and i only wish i knew what kind of coffee they are brewing up here.

alas, the dinner plates were swept away by the staff and dessert was upon us.  well, we just had to go all out in celebration of opening night!  see how easily i convinced you that we needed a final course?  yes, my powers of persuasion are quite powerful.

anyway!  per the waitress’ recommendation, we shared the peanut butter s’mores pie.  oooh yes!  first, s’mores are one of the most wonderful desserts ever invented by man.  but throw in peanut butter and i guarantee you will have a strong following of sweet teeth.

it was the perfect portion for the four of us to enjoy together.  the toasted marshmallows were a nice touch and the housemade peanut butter was indulgent, but it’s the dark chocolate mousse that got me.  i wanted to ask for just a bowlful of it to take to-go, or to eat in the car ride home… 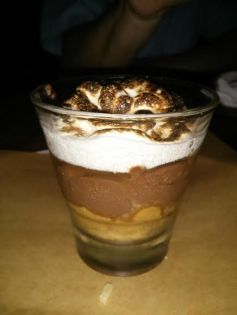 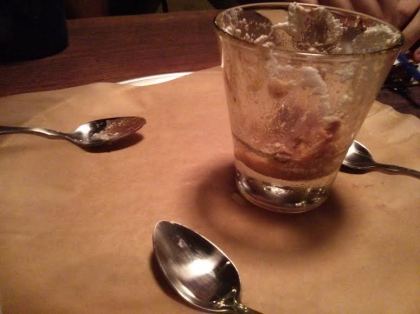 we paid the bills and gathered our things, but before leaving, i found creighton behind the bar to again thank him for his hospitality that evening.  the staff was kind and eager to please on their opening night.  they, and the food, made such a positive impression that i do not doubt we will be returning.  considering the great atmosphere and comfort food served here, we are especially looking forward to coming back when the colder months arrive.  i mentioned to creighton that hot cocoa, cider, and stew definitely need to be on the menu once winter is here, and he agreed wholeheartedly. 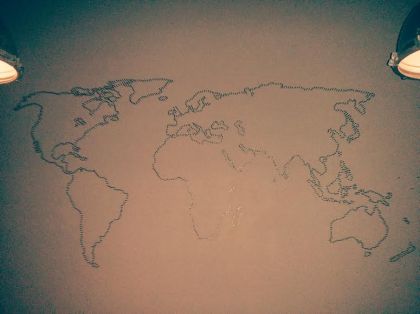 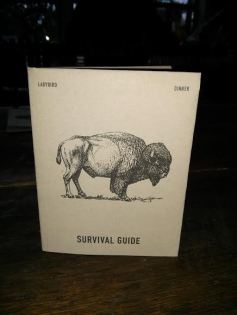 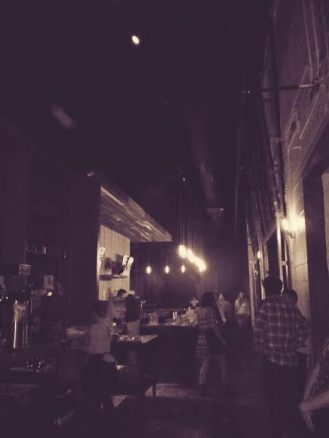 as we made our exit and found our cars, i realized we never learned how the name ladybird grove and mess hall came to be.  i e-mailed the general manager later to find out, and it was interesting to read his reply:

“some restaurants are created with a name in mind and the concept molds to fit it.  others are a concept that struggle to find a name.  ours is definitely that latter.  [operating manager] michael lennox has had the concept for this restaurant in mind for quite some time, but came upon a name fairly late in the process.  aligning with the restaurant’s themes of the outdoors and nature, the restaurant is a light homage to ladybird johnson and the work she did as first lady and beyond in ensuring that average americans had access to wild spaces by way of national and state parks.”

that’ll do, creighton.  that’ll do.