our final day arrived!  and i was looking quite forward to doing a lot of relaxing, as it was our one and only day at sea.  i rolled out of bed, and we met everyone on the upper deck for a little breakfast.  as we were chomping down on handmade omelettes and bacon and fruit, the emcee from the dance floor announced that music trivia would be starting shortly.  music trivia?  we should be able to dominate!  ali went to get our answer sheet and pencil, and we all waited as the questions were asked.  there were a total of 20 questions, and we answered 14 correctly!  we soon found out that we were the trivia winners, which of course is deserving of some kind of reward.  i suppose on a cruise ship there’s only so much they can give away, so we walked away with a sweet trophy replica of the carnival imagination.  go team! 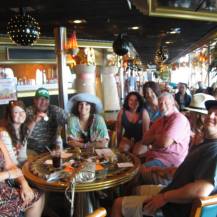 such a good looking group. 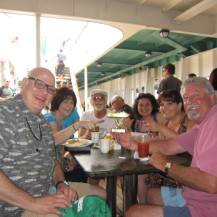 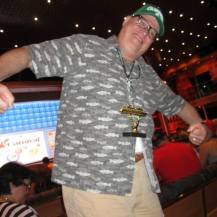 just a few minutes later, bingo was being hosted in the grand theatre, so there was no time to lose.  uncle jeff, aunt cindy, milo, ali, and i trotted downstairs, bought our bingo sheets, and settled in for some good ole’ fashioned fun.  the host was a hoot, and although none of us got the chance to yell “bingo!” during the game, a couple of us walked away with a few bucks with our scratch-off cards. 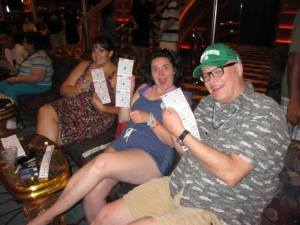 after two exhilarating activities, i was ready to bum around.  i joined uncle craig and aunt janie back on the upper deck.  the sun had finally broken through the overcast morning, hooray!  i lathered on the spf 30 sunscreen, adjusted the beach chair, and closed my eyes to just be.  the weather was as beautiful as it was when we arrived, and i honestly could just not get over it.  what a treat!

we enjoyed vodka lemonades and some snacks throughout the afternoon.  at some point, people-watching just could not be avoided, as the dj was hosting a party out on the dance floor.  at least they played some iggy azalea, my jam!  i only wish we had one more day out here!

as the late afternoon turned into the early evening, we gathered our things to spruce up for the night.  as i got changed, i realized my sunscreen “lathering” wasn’t quite as thorough as i had thought.  i had some sweet tan lines, and my face was quite red.  nothing like a little natural sunshine on those cheeks, right?  sure…

the theme this evening for dinner was nautical, so blues and reds and stripes were perfectly in order.  erin even brought captain and sailor hats for us all to don!  aren’t we just the most adorable bunch?  everyone else thought so, as we were receiving the sweetest compliments throughout the night.

our final meal together was really quite lovely, and i had to push out the thought that it would be a few months before i would see everyone again for my brother’s wedding.  “stay in the moment!” i told myself, and that is just what i did.  we reminisced on our favorite moments with uncle craig and aunt janie, the guests of honor, and indulged one last time.

after finishing our desserts, we quickly made our way port side to the comedy show.  although the comedian was a bit inappropriate, we were laughing the whole half hour he was up there.  sometimes things are funny because they’re true, and sometimes they’re even funnier when we call them out and make fun of them.  at least the crowd had a good sense of humor for him!

we cousins weren’t ready for the night to end just yet, for that meant the vacation was coming to an end soon, too.  it just so happened that some of the crew members were hosting an 80’s throwback concert onboard, the perfect distraction for us.  sara, ali, kate, brian, and i danced and sang along to michael jackson and eddie money and many other fabulous bands.  although i was right on the verge of all-night raging, we all silently consented that it was time for the night to end as the band began to pack up.  it is always too soon, yes?  well, that is what they say when you are having fun.