WOW!  What can I say, Kelsey and I recently had a “father/daughter” weekend and it was FANTASTIC.

Macon, GA and Andersonville, GA.  Granted, these two locations may not sound glamorous, fun, etc…but we had a TERRIFIC time.

First of all, a big “shout-out” to Kelsey’s husband Phillip for being “part of the solution” for this weekend.  As a way of saying thanks, I did provide Phillip with some goodies.  Three sleeves of Pringles, a package of Thomas’ English Muffins, and an entire jar of Smuckers Orange Marmalade.  Guys are so simple.

And now to the highlights, and there were plenty.

As some of you know, one of my “trip traditions” is to bring a baseball cap and have people that we meet and chat with autograph the hat as a keepsake.  Kelsey reminded me that a couple of years ago I gave her a modest collection of the vinyl albums that I had.  One of the vinyl albums was from the Allman Brothers titled Eat a Peach.  Since part of the trip included a stop in Macon, GA to go to and visit the Allman Brothers Museum (AKA The Big House), I had a BFO, or blinding flash of the obvious.  Instead of having people sign the baseball cap, have people sign the album cover.  HOME RUN!

For my visit, Kelsey had baked my all-time favorite breakfast, her world-famous cafeteria coffee cake.  MAJOR YUMMO that Friday morning!

Our next step was Macon, GA and the Allman Brothers’ “The Big House.”  We arrived, and it was almost a religious experience.  We walked around and toured The Big House for almost two hours.  If you or your mom or your dad are Allman Brothers fans, this is a terrific trip.  The Big House includes almost everything you can imagine:  lyric sheets, contracts, drums, keyboards, clothes, etc…If you are looking for a unique/creative gift, a trip to The Big House would be perfect.  We met and talked with several different “hippy-dippy” types and had a great time.

It was then early Friday afternoon, and since Kelsey and I were both hungry, we opted for a restaurant that the Allman Brothers enjoyed, the now world-famous H&H Cafe.  The perfect little “hole in the wall.”  Kelsey had fried chicken and I had the brisket sandwich.  Great stuff.  Our server was nicknamed “Panda,” and she signed the album cover.  Sidebar, there were two Alabama football fans at H&H.  I guess they’ll let anyone with money come in. 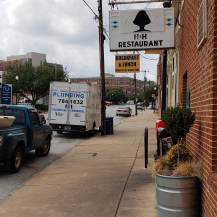 Kelsey’s husband Phillip attended Mercer University in Macon, GA, so our next stop was to drive to Mercer and take a very nice walk around the campus.  The campus just oozes with education and smart people, and I was overcome with all the knowledge surrounding us. 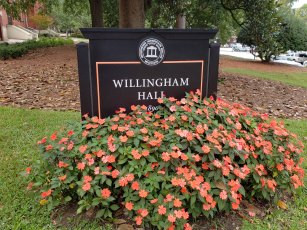 One of the big highlights of Mercer was the time we spent with the statue of Jesse Mercer, the founder of Mercer University.  One of the many great traditions at Mercer involves the rubbing of Jesse’s head.  Well, in addition to rubbing Jesse’s head, I also poked him in the eyes, picked his nose, etc… 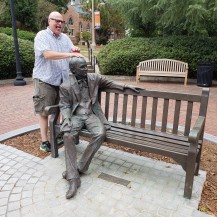 We then resumed our Allman Brothers tour and went to the intersection where Duane Allman died, which occurred when a peach truck pulled in front of him while he was riding his motorcycle.  Interesting that at this intersection there is no plaque, no marker, etc…We then drove and saw locations where the Allman Brothers lived.

The final stop of the tour was the cemetery where Duane is buried.  To say that this was an “adventure” is to be modest.  The graveyard itself is an old Confederate cemetery, and as such, the roads to drive on are very, very narrow and very, very hilly.  Kelsey and I were driving around and hadn’t yet found Duane when Kelsey asked, “Hey, Dad.  How much gas do you have?”  YIKES!!!  I was practically running on empty, just like the song from Jackson Brown.  We eventually found a car full of kids and pulled up to ask “Do you know where Duane Allman is buried?”  “Yes, right up there,” they said as they pointed to some orange construction tape.  We did not come all this way NOT to see where Duane is buried.  We drove back up the hill, parked, and walked down to the grave.  We had finally made it!  We took a few moments to enjoy a beer, and I think Duane would have appreciated that.  Upon leaving we promptly found a gas station and filled up and headed to our hotel.  🙂 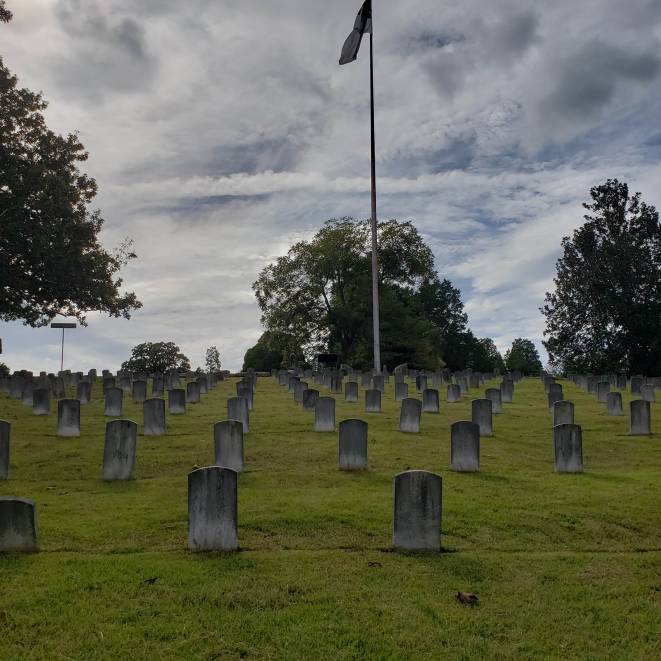 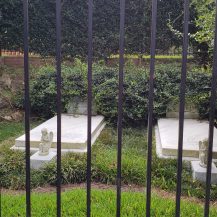 Now, normally I would not comment on a hotel, but there were three special reasons to comment on the Marriott in Macon, GA.  #1 – Great water pressure and a terrific shower head.  HOME RUN.  #2 – At the same time we were there, the hotel was also hosting a meeting for county coroners from the state of Georgia.  Creepy.  Many cars in the parking lot with stickers saying “Coroner”.  #3 – The hotel was also hosting the 50-year reunion of a Macon, GA high school.  1968.  YIKES.  I am not that old but getting closer every day.

Next was dinner at a place called The Rookery, and it was terrific.  Kelsey had the best dish of the meal:  pimento cheese french fries.  They were SUPER YUMMO! 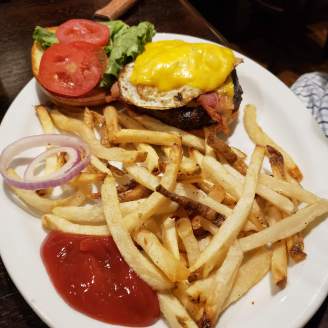 Saturday morning arrived after a good night’s sleep.  Now, I have a keen interest in the Civil War and had heard about and read about the POW camp in Andersonville, GA.  Not a nice place.  40,000 prisoners in a camp built for 6,000.  No bunks, no beds, no Wi-Fi, no Starbucks, no sushi, no apps, etc…Just you and what you had on the ground.  A very, very humbling experience.  An open field, the hot Georgia sun during the summer, and one small, narrow creek for water.  All your water.  To both drink and use the bathroom.

After finishing the tours in Andersonville, we were in the “home stretch” as we drove back to Kelsey’s condo.  We got back just in time to watch the Tennessee-Georgia football game (Go Dawgs!).  We also enjoyed a terrific dinner grilled by Phillip, watched about half of the Ohio State-Penn State football game, and then went to bed.

Then on Sunday morning, Phillip did eat, all at once, an entire Tablespoon full of the orange marmalade.  GO MERCER!

3 thoughts on “macon and andersonville”