ladies and gentlemen, i am reporting to you live as the final presidential debate takes place between mr. donald trump and mrs. hillary clinton.  i have once again found myself out of town for this entertaining and informative viewing, this time coming to you direct from west palm beach!  i will admit that splitting my attention between blogging and listening is a bit of a task, but i will do my best.

in response to my previous post about the second presidential debate, my lovely friend courtney replied that i should enjoy the final presidential debate by enjoying chips and guacamole while listening to some billy joel.  well, ask and you shall receive!  as things at my client site wound down, i asked them for a good mexican restaurant recommendation nearby.  after a little mumbling and collaborating, torero’s authentic mexican cuisine was suggested.  only about ten minutes from the office, it was rightly a no-brainer for me.  with google map’s turn-by-turn directions in the background, i let billy joel serenade me along the way.  give me more of that “uptown girl”, i beg you!

anyway!  the breezy atlantic winds were blowing strongly this evening, so i requested a seat outside on the patio.  although the food was delicious (and i’ll get to all of it shortly), the service left much to be desired.  after seating me at my table, i wasn’t waited on for about 15 minutes.  eh, not the best way to start the dinner.  however, i caught up on all my social media feeds and e-mail inboxes so i wasn’t too ruffled about the delay.

it had been quite a day at the office, and with two more days on-site, i knew it was going to be a busy end of the week.  chips, salsa, and the large house margarita sounded like a bet i couldn’t lose, so that’s just what i started out with for my meal. 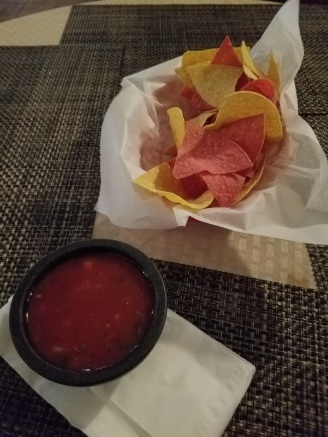 i took my time sipping on my beverage and snacking on some chips and eventually ordered, per courtney’s request, some guacamole.  i’ll be honest, the guacamole was less impressive than the salsa.  it’s not that it was bad; i ate the entire plate.  however, it wasn’t anything particularly special.  now, i don’t like to discriminate when it comes to guacamole because, let’s all be real, there’s not much better than avocados really any day of the week so i ate my dip contently.

as i finished up my appetizers, i asked for an order of the fish tacos because, you know, i was in florida and fish tacos sounded like a good idea.  unfortunately, after taking my order the waitress returned to tell me, much to my dismay, that they did not have fish that night.  well, alrighty then…since i was still in the mood for tacos, i ordered a chorizo taco and, per the waitress’ recommendation, a steak taco.  well, i’ll say that these tacos were the highlight of the meal.  the chorizo wasn’t too spicy but was quite flavorful and the steak taco wasn’t overly filling.  i’d absolutely order these two tacos again, but with so much else on the menu, i’m sure i’d try something else if i were to return here to dine.

so, with the end of this meal and this campaign on the horizon (and i know many of you are awaiting its close), i want to kindly thank everyone for participating in my campaign and debate journey in good fun.  i also want to say how impressed i am with the attention my peers are giving to this election, knowing that the outcome will affect our very near future very soon.  if you’re registered to vote, i encourage you to exercise your american right to make your voice heard.  let’s start the show!