with phillip moved into the condo (how exciting!), we needed somewhere for his tv to go.  i already have a sizable flat screen in the living room, so it seemed the perfect place would be the guest bedroom.  now, if you’ve ever visited the condo, you know there isn’t a lot of space.  i mean, we have it perfectly decorated that not one more piece of furniture can really be purchased, which just means that if we can’t expand horizontally then we go vertical!  yes, that’s right, we decided to mount the tv on the wall in the guest room so that it wouldn’t have to sit on a crowded entertainment unit.

while the idea of a mounted tv sounds thrilling, the actual process of getting that thing hung became another item on the bucket list that i never knew was there.  and because i didn’t want all my fans to miss out on the fun, i invited kyle and kari over to assist/watch/laugh.  you know, help us create proof that the tv once was not hung and now is affixed perfectly to the wall.

so, in order to mount a tv, you obviously need the proper tools, right?  right!  first things first, the wall mount.

the tools to get the job done. 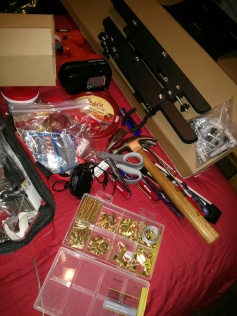 a positive attitude accompanied by lots of enthusiasm.

and last but not least, very full glasses of wine.  cheers to home improvement! 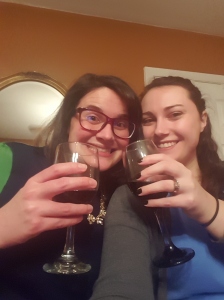 in true male fashion, phillip and kyle dove right into the box, grabbing the wall mounting arms and immediately chattering about how they should be connected to the tv.  kari and i watched in amusement as they assured themselves step after step that “yes, this is how it goes.”  as they explored the contents of the hardware provided, i snatched up the ikea-style instructions to figure out just what the heck needed to happen.  and wouldn’t you know it!  it told us just what to do! 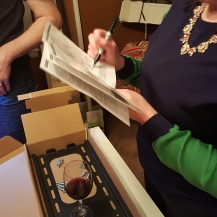 it’s true, boys.  next to diamonds, user manuals are a girl’s best friend.

notice how i’m holding my wine while i point. classic.

much back and forth continued among the novice and experienced handypersons in the room, and soon enough the fellas were fastening the tilt arms to the back of the tv.  who needs a man for hire when you’ve got these buff boys on call!

the next step in the process was to figure out where the actual mount was going to go on the wall.  centered in the middle of the bed was the obvious choice, so after making that determination, we got to work.  phillip unwrapped the mount and made an amazing discovery – the wall mount had a level built into it!  isn’t that just the most clever thing you’ve seen in a while?  we thought so, but then again, we’d have a couple glasses of wine, so most anything was amusing at this point. 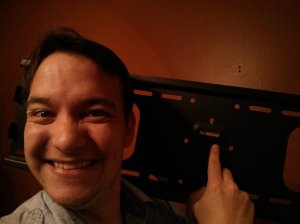 now, as you can guess, there’s an exact science to all of this stuff, which is why it took three of us to decide exactly where it needed to be and where we needed to drill to make that happen.

the instructions advised drilling the mount screws into a stud, which sounded straightforward enough.  although i didn’t have an actual stud finder in my toolbox, i was confident we could use the ‘ole knock-on-the-wall-and-find-a-stud method to locate where we’d drill.  sure!  kari’s confidence was through the roof.

writer’s note:  we came to find out later that studs are typically 16 from center, which would have been great to know a few nights ago.  oh well!  this is what home ownership is all about!

after banging around for about ten minutes, we realized we didn’t know where the studs were.  we realized it even more after we thought we found one and then proceeded to drill right on through the dry wall.  oh, that’s okay!  that just means we get to go to wal-mart and get a stud finder!  and that’s just what we did.  kari drove us over to howell mill so that we could pick up a stud finder, the batteries to go with it, and a bag of fritos.  handy hands are hungry hands!  (i just made that up…)

we returned to the condo energized and confident that our project would be completed within the hour.  oh, and did i mention we were working late into the evening?  i mean, it was almost midnight before we hung our tool belts for the night.  talk about dedication!

we booted that puppy up and that’s when things got super fun.  phillip threw caution to the wind and attacked that wall with the stud finder without a care in the world.  as the incessant beeping turned into a bad memory, kari, kyle, and i tried to decipher the incredibly unhelpful picture-by-picture instructions.  seriously, folks, they were so bad that we had to look up the company’s youtube channel for help. 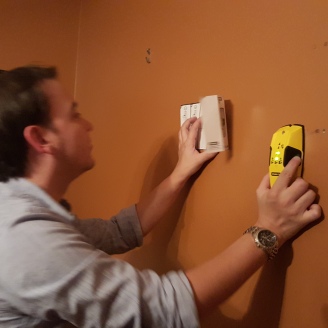 as the noise continued and our uncertainty grew, all joy flew right out the window into the winter night.  the wine had worn off as had my patience, so the festivities came to a close for the day.  we shut off the lights and closed the door, waiting for another moment of inspiration that would help us finish what we had started.

after a long week of work and the night before my parents would be in town for a holiday weekend visit, phillip and i both powered up with the assurance that we would get that tv mounted if it were the last thing we did.  armed with encouragement and an electric drill, we got to work.

phillip drilled the pilot holes we needed for the screws and looked mighty fine while doing it! 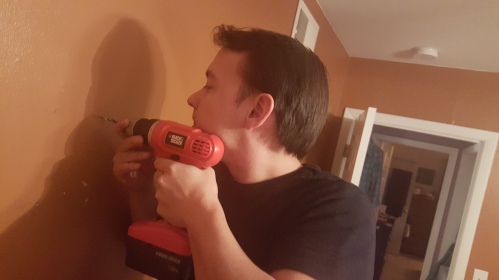 and then we actually put that mount up on the wall, right where it belonged…

…and then we put the tv arms on the rails…

…and then we plugged all the cables in…

…and then we put the room back together and it was all done! 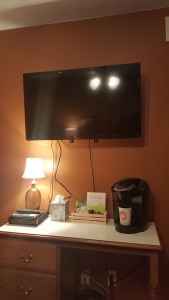 i was jumping up and down for joy as we laid on the bed and basked in the glory of everyone’s hard work.  for phillip and me, it was a great learning experience, as this was our first home project we tackled together.  patience and gentleness and self-control and support were all part of the equation, and i’d like to say that things added up nicely.  we now have a perfectly complete and lovely and inviting guest bedroom (complete with tv, chromecast, and in-room keurig!) for anyone who’d like to visit and stay.  nuestra casa es su casa!