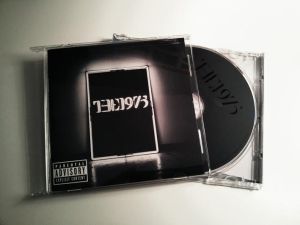 folks, what you are seeing here is a rare form of music:  a compact disc!  a cd!  yes, i do still browse the racks at best buy to see what new music is hitting the shelves, and that’s where i found myself last night.  i was on the search for the backstreet boys’ june 2013 studio release in a world like this.  clark and i had seen the video for the single “show ’em (what you’re made of)” on vh1 or mtv the other morning, and i about flipped.  how did i not know they had made new music?!  but alas, the album is only available for purchase online…you should know that i’ll be placing an order for my copy soon.

well, since i had no luck with the backstreet boys, i roamed the cd’s for the 1975.  i fell in love with their first single “chocolate” and am definitely digging “girls,”, their latest hit to pop up on the radio waves.  the manchester natives dropped their self-titled album last fall after producing a couple of ep’s.  the four-man band has toured extensively over the past couple of years to build hype and support for the group’s alternative and stripped down approach, and they’re performing all over europe, canada, the states, and australia before the year is done.  there’s a good chance i’ll be going to their house of blues performance in boston in december with my buddy vinh.  eek!

i’ve listened to the cd almost the whole way through, and i’m enjoying every bit of it.  it’s upbeat without being overly energetic; a good mix of cruising and jamming songs.  i appreciate the quick and funky introduction of “the 1975” and transition in “an encounter.”  i don’t know which track i like most, but right now i might say “chocolate” is still my favorite because of their higher-pitched voices and the inflections from their accents.  it didn’t get replayed on the radio enough if you ask me.

these guys are grungy and hip, and i love each ounce of it.  i realized it’s the perfect summer album just as summertime is drawing to a close.  hm, i suppose i can listen to it as fall comes around the corner.