last week my friend amy posted a recipe for spicy asian shrimp with rice noodles on her facebook wall.  the picture looked divine, so i sweetly insisted she give me the recipe right away!  she kindly obliged, admitting that she actually thought of this dish all on her own.  i asked if, after making it, i could post it on the blog, and she gladly agreed.  thanks, girl! 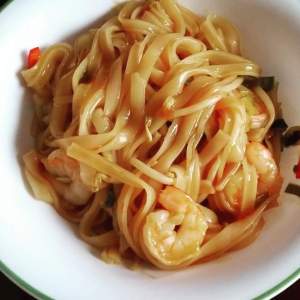 before i get to the actual recipe itself, though, let me introduce miss amy.  it was a hot august afternoon back in 2006 when amy and i met at band camp for the university of georgia redcoat marching band.  yes, we were both band geeks in the absurdly lame mellophone section, and although we may have refined ourselves in the many years since, i think we will always have a bit of a music nerd tendency in us.  we spent our fall semesters side-by-side as we cheered on the georgia bulldog football team through some dismal losses and glorious victories.  i guess it’s not always about the outcome but the experience and journey, right?  sure.  whatever will help your championship-less heart heal, kels. 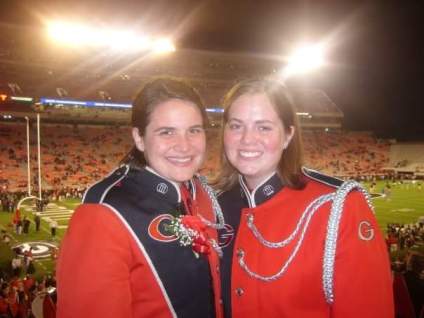 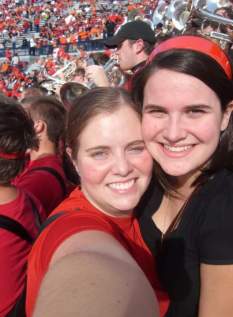 what else did we do?  oh, yeah, we (and larissa and justine!) danced around my freshman dorm room like crazy ladies who belonged in an asylum.  those were the good ‘ole days when brumby hall was an all-girls dorm, when homework only took me a couple of hours, and when all was right with the world.  ah, where did the days go? 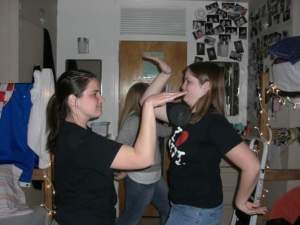 before getting this post together, i asked amy if she remembered the video we were watching when we were going out of our minds that night.  her memory almost escaped her, but then she saved the day by recalling it was this video:

now, why were we so obsessed with this video?  i have no idea!  all i remember is that we watched it probably 20 times in a row, laughing just as hard the last time as we did the first.  it’s one of those videos where you think it’s hilarious but then you show it to a friend and their level of laughter response is not nearly through the roof as you would expect it to be.  that, honestly, happens to me quite often.  i find myself slightly embarrassed and then remember that i don’t care, that if i think it’s funny, i’ll watch it over and over again until my sides hurt with stitches.

for example, this video usually gets a decent laugh, but i remember having tears in my eyes when i saw it the first time.

oh, and then here’s another.  actually, now that i think about it, my mom and brothers always laugh at this one with me because we had a corgi growing up.  oh, sweet casper, we miss you so much!

another hit that caused me to fall off a cooler as i became victim to the silent laugh is bizkit.  i’ll admit, i’d had a few to drink.  thank goodness the cooler wasn’t tall and there was carpet on the floor!

this next one, warning, does have some explicit language.  however, i couldn’t help but include it!  credit for this video goes to my old roommates kellie and aja when we lived in alpharetta.  man, those were the good times!

and who can forget kittens inspired by kittens!!!  i love to quote this one and am unstoppable when i remember just how hilarious it is.

wait, is it interesting or embarrassing that most of these videos are animal-related?  to save face, we’ll say it’s interesting, although we all know that when someone says something is “interesting” they really mean they don’t approve or like it.  whatever!  this blog is mine, so i’ll post whatever funny videos i like!  God bless the internet!  (okay, i don’t mean that in the rude way it may have just come across.  please still like me!).

okay!  so, now that i’ve got all of that out of my system, shall we make some spicy asian shrimp with rice noodles?  sure, why the heck not!

i had a fun time making this one, especially since it came from a friend.  all credit is owed to amy, so give it a try when you’ve got a free night!

2 green onions, chopped (i used three because i like green onions and two just didn’t look like enough in that big ‘ole pan i have)

1 clove of garlic, minced (i used about 2 cloves because who doesn’t love more garlic!)

1 bag of frozen medium shrimp, peeled & deveined (amy got hers from publix)

a taste of thai rice noodles, about half the bag (about 8 ounces total, seeing as how i used half a bag of 16 ounces)

now, i actually want to stop right here for a quick moment.  i know a lot of home chefs, and professional chefs for that matter, like to use the phrase “to taste” when cooking.  me, i’ve gotten more used to it over the years, but i initially like at least a guiding measurement to go off of before i complete wreck a dish all on my own.  believe me, it’s happened, and it ain’t pretty.  i also think it’s a bit of the baker in me coming out because you can’t really eyeball baking soda and baking powder and expect everything to turn out fabulously.

so!  when all was said and done, here are the seasoning and sauce measurements i ended up using and liking.  i’m a bit of a spice wimp, so adjust accordingly depending on your spice tolerance.

i used half a 14 ounce can of bean sprouts (now, i love bean sprouts, so i went a little heavy on these, just a head’s up)

2 Tablespoons rice wine vinegar (probably only needed 1 Tablespoon to be honest; i think the second Tablespoon made the “sauce” too thin – i wanted a thicker sauce) 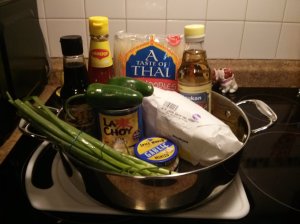 prepare the rice noodles according to package instructions for stir fry.  this consists of filling a bowl with hot tap water, letting them soak for 25-30 minutes, and then draining them.  voila!  that easy!  set ’em aside once they’re prepped. 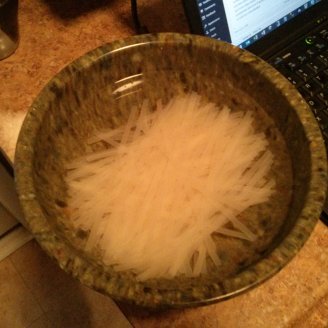 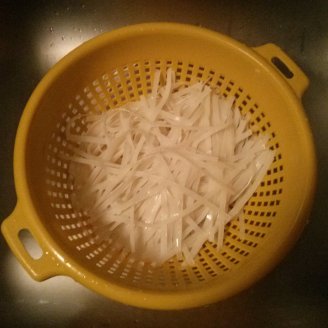 get those shrimp all defrosted and then set aside.  if you’re like me, though, you bought fresh shrimp from disco kroger because they were on sale and all you had to do was take off the tails.  you also didn’t have the patience to wait for a whole bag of frozen shrimp to thaw.  whatever works for you! 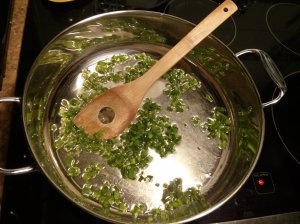 while all of this is happening, sip on some pinot grigio out of a sake inspired cup and munch on cold fried chicken leftovers from max’s wine dive.  yes, folks, you read correctly:  cold fried chicken.  i swear, it’s delicious.  if you don’t believe me, try it for yourself!  i have a feeling that when i’m all kinds of pregnant with child (someday, not today, oh heck no!) that cold fried chicken is going to be that food i crave.  probably along with something incredibly inconvenient to get late at night like a milkshake from shake shack and mcdonald’s steaming hot fries.  future husband, i apologize in advance for all the running around town you’ll have to do to satisfy my pregnant needs.  i will love you forever, i swear! 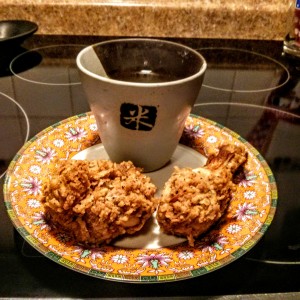 add shrimp and sprouts to the pan along with the vinegar, soy sauce, and thai chili sauce. 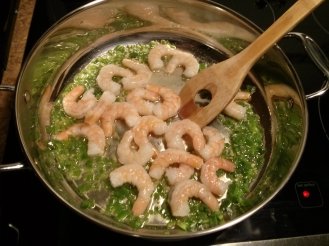 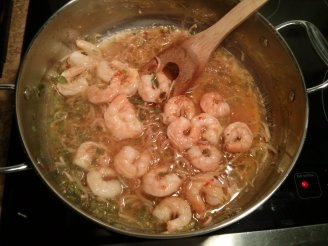 let flavors combine on low-medium heat.  add rice noodles to the pan and coat with shrimp mixture.  (this is where amy added more chili sauce to coat the noodles).  the sauce is really going to be more of a broth, that is if you made it the way i did.  🙂 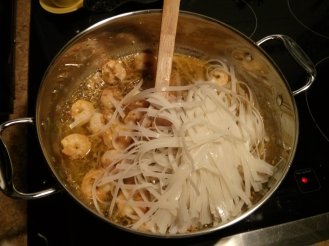 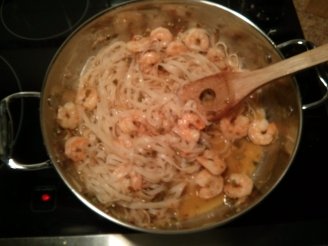 serve your tasty dish up in a brand new fancy bowl you bought from world market because you had a birthday coupon (seriously, you bought it right before you went to the grocery store to get the ingredients for this dinner because world market is right next to disco kroger).  then, because you’re extra fancy, stick in some chopsticks you got from a thai acquaintance you met waaaay back in high school when you were at presidential classroom in washington, dc.  finally, top it with a lime wedge because, you know, it could use a lime wedge! 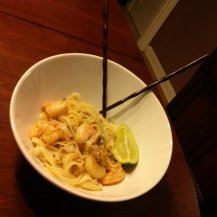 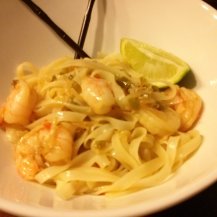 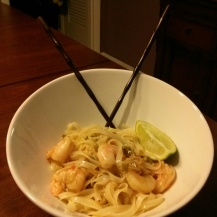